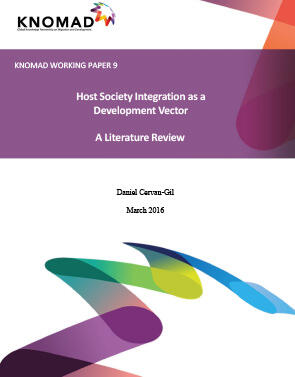 Host Society Integration as a Development Vector: A Literature Review

The emergence of migration patterns characterized by circularity, multiple stages, and increased transnational activities has led to new paradigms of integration into the host society that appear promising for development. This review aims to organize the various discussions, debates, and academic literature pertaining to the relationship between migrant integration in the host country and development in the sending country, an under-researched topic in the scholarly literature. A main conclusion is that migration, especially when effectively managed, can benefit both the host and sending countries as well as the migrants themselves. This outcome occurs especially through policies and programs that promote migrants’ economic integration, such as language training, credential recognition, progressive access to citizenship rights, antidiscrimination laws, and so on, and also through the migrant’s own active engagement in social networks, both within their communities and within mainstream society, in politics, in trade, and in other realms. The literature stresses the importance of transnational networks and associations that share norms, values, beliefs, or understanding in facilitating cooperation between those who emigrate and those who stay in the home country, increasing their potential positive effects on development. To develop new theoretical migration research and policy, however, new data sets (for example, on migrants’ multiple migration, rates of return and double-return migrants, the depth of diasporas’ transnational linkages beyond remittances, the length of their stay in a given country, and others) are required. Finally, several gaps in the literature that could be further researched are presented.