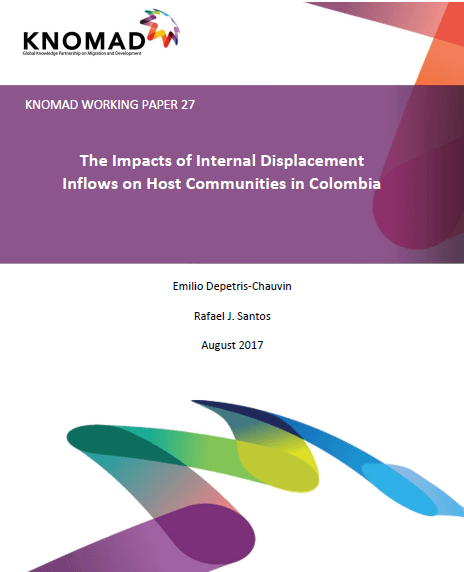 The Impacts of Internal Displacement Inflows on Host Communities in Colombia

Using Colombia as a case study, this report provides new empirical evidence on the impact of inflows of internally displaced persons (IDPs) on host communities. The focus is on three outcomes from several databases: relative rental and food prices, poverty, and public investment in education and health. A distance-weighted measure of outflows in the rest of the country is used as an instrument for inflows. To study the impact of IDP inflows on relative rental and food prices, this report exploits quarterly data over the period 1999–2014 for the 13 largest Colombian cities. On average, higher IDP inflows decrease rental prices, but the impact varies with income levels: rental prices increase (decrease) for low (high) income units. Surprisingly, higher IDP inflows are associated with lower food prices regardless of income level. The analysis for poverty is based on two strategies. The first exploits two census cross-sections to document a positive relationship between IDP inflows and unfulfilled basic needs at the municipality level, a measure of poverty widely used in Latin America. The second uses rich panel data to show that host community residents’ household consumption decreases as new inflows arrive in their municipality. Albeit statistically significant, the economic magnitudes of the documented effects on rental and food prices, as well as on poverty, are rather small. Finally, this report uses annual municipality-level data on public investment in health and education, and finds no statistical relationship between these investments and IDP inflows. Concerns about data quality and the complexity of the connections between different levels of government hinder the interpretation of the results from this last exercise.