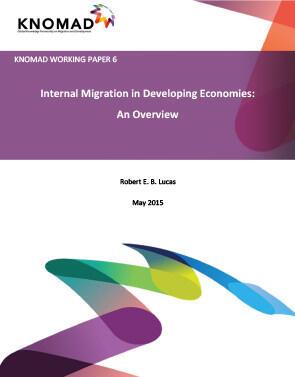 An overview is provided of the state of knowledge on internal migration in developing economies, with particular emphasis on recent contributions to the literature. The overview is divided into five sections. The first addresses some of the issues in collecting data on internal migration and some of the stylized facts about internal migration in developing economies, noting the differences between internal and international migrations. Ten elements that act as drivers of both rural-urban and rural-rural migrations are described next. These include the search for improved income opportunities and the development strategies shaping these; the role of education and dispersal of amenities; the underlying effects of climate change, natural disasters and violence; as well as the concern for family unification. Five sets of constraints upon such movements are then outlined: financial constraints, distance, incomplete information and intervening opportunities, mitigated by the influence of social networks. Some of the methodological difficulties in deducing the effects of internal population movements on production and income generation are considered in the third section, as well as the available evidence of these impacts in China, India and Sub-Saharan Africa. In particular, this section looks at productivity gaps between sectors and the links between migration and structural transformation; the selectivity of migration, the commensurate patterns of remittances and hence inclusiveness in any benefits from internal migration; and external costs potentially imposed through internal migration and the growth of mega cities specifically. The final section offers some thoughts on migration-related policies, noting that the most pertinent policies are those which address the drivers and constraints outlined in the earlier sections.